Hydraulic systems play an integral across industries and have helped to make work easier by leveraging the hydraulic power to translate seemingly smaller efforts into a large force.

The concept of hydraulics is particularly useful in the marine industry. In this industry, most processes require objects to be moved from one place to another by applying a relatively small amount of force.

The industry also uses hydraulics in a wide range of applications, including engineering, mechanics, and more.

Hydraulics has several advantages over similar methods of operation, including the use of much less force to move greater loads and get work done.

The concept has greatly reduced the manual workload initially performed by humans. With the use of hydraulics, operators have greater control during operations.

Other important applications of hydraulics include automation as well as control engineering. 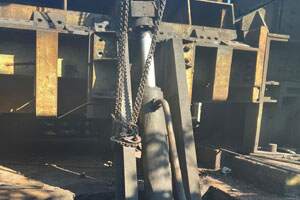 What are some of the hydraulic parts for ships and why are these parts important?

A ship can be viewed as a mobile power plant with a wide range of machineries for propulsion, shipboard safety, as well as cargo operations.

When engineers build these machineries, they also ensure comfort standards of the crew members are observed.

The hydraulic technology as a whole is so accurate and precise that they are applied in the main engine control as well as the manoeuvring systems. Here are hydraulic parts for ships and the marine system as a whole.

A ship is typically made up of several hydraulic parts.

The engine room is comprised of various machineries and parameters that help with the control of the ship and safe operation.

Prior to the advancement of the hydraulics technology, manpower on board ship had to involve so many crew members with each one of them assigned a specific set of tasks to perform.

However, with technological advancements in the industry, automated hydraulic control systems, the workload that required a lot of manpower has dropped significantly to the extent that a large ship is now manned by just about 13 to 15 people.

It can be very difficult and cumbersome to carry out cargo operations manually.

With the introduction of hydraulic circuits to support valve operation, operators can now manage operations in the control room without much manpower.

They all contain hydraulic motors that make work easier and use hydraulic oil under pressure.

Therefore, a ship is made up of several hydraulic parts that make it easier to operate and maintain while ensuring the comfort of crew members.

The advent of hydraulics has significantly reduced the number of crew members initially required to operate a ship.

Regardless, a ship needs to be maintained regularly to ensure its smooth operation.